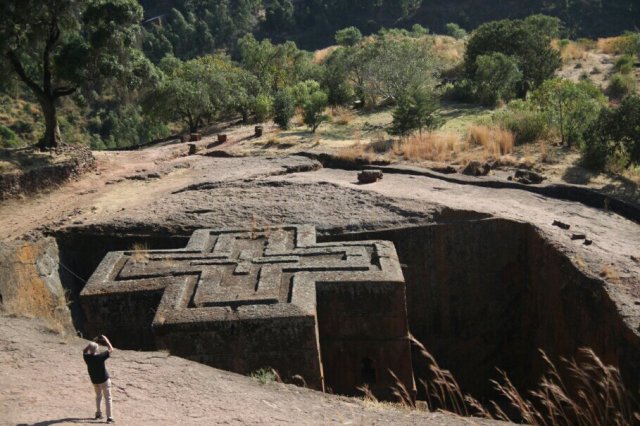 At some point in Lalibela the idea of building churches up from the ground stopped making sense and instead, it was decided that they should be carved out of solid rock. There are 11 churches (depending on how you count) that were carved and dug out of the ground. The one above is the Church of St George. Like most, it’s three stories tall and all made in one piece of rock. Although they were impressive from inside, their true grandeur was most visible from outside. According to legend all eleven were built in 23 years, but it seems likely that it took longer.

The churches were the main (only) reason we visited, but the caves and tunnels that were made to connect some of the churches were just as cool. As we left one church, our fifth of the day, we were looking for something a little different. Dom noticed a dark passageway and asked where it went. “To the next church… but wouldn’t you rather go up and around?” Really??? No! So our guide led us through, turning on his cell phone flash light only near the halfway point. When we got to the far end, there was a gate… which was locked from the outside. Oops. Luckily a guard heard us knock and other than look at us like we were weird, had no issues letting us out. 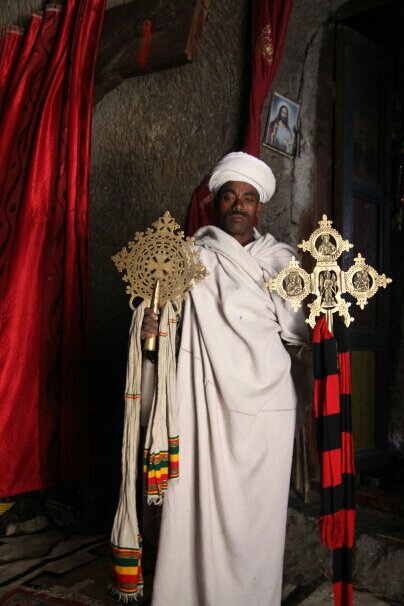 All the churches had artifacts on display and monks who were, to varying degrees, interested in sharing and showing them off. We learned that there are ONLY three types of crosses in Ethiopia: Gondar (above left), Axumite (above right) and Lalibela. The Lalibela reminded me of a dancing Shiva with a circle with seven points around the outside. At the next church, we learned that there were ONLY six types of crosses in Ethiopia. This monk also included hand-held crosses, necklace crosses and staff crosses. The mathematician in me wanted to ask about the possible permutations like hand-held Axumite and staff Gondar, but decided it would probably get lost in translation.

Having not terrified us on the last cave/tunnel, our guide offered us a choice for the path to the last church. We could the “Heavenly Route” by going up and around which would give wonderful views of the city and surrounding valley. Or we could descend into “Hell” and take the unlit 50m (~165ft) tunnel. We opted for the tunnel. “It will be good practice,” our guide told us… jokingly, I think. 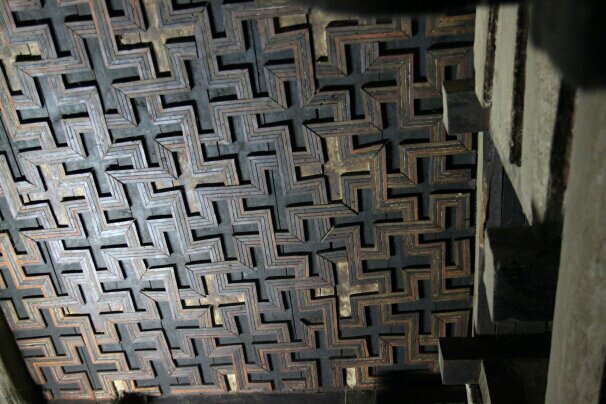 Christmas day consisted of an 8km (5 mile) hike up the mountain on the edge of town, a 42km drive on rough roads and dinner in an architectural experiment. It started at 7am to beat the heat. Over those 8km, we gained more than 1000m of elevation, and we didn’t start low. The monastery we were going to was around 3400m above sea level. The view from the top was better than the monastery we came to see, but it was still worthwhile. We each rode a mule part of the way. Dom got to ride, I was told I should ride “for the experience”. We didn’t even remember it was Christmas until half way through the hike since Ethiopia is on a different calendar and doesn’t celebrate until Jan 7.

After the hike and a quick lunch, we climbed into an old land rover for an hour long ride over some of the roughest road I’ve been on. The giant earth-moving machines had to pause their work to let us by on our way to one final church. This one was in a cave and was built up rather than carved out. There were intricately carved wooden ceilings and doors that made this one our favorite of the churches in Lalibela. 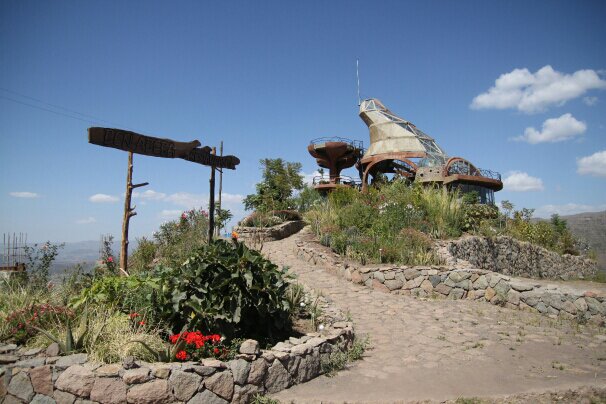 When we returned, it was almost time for Christmas Dinner and although we couldn’t find any place that made tacos, we decided to treat ourselves. We went to Ben Abeba, the best Scottish-Ethiopian restaurant in Lalibela. It’s run by a wonderful and vibrant expat living there in a state of semi-retirement. She wanted to celebrate with others on Dec 25, rather than waiting so threw a party. It was wonderful. We arrived and meet two couples, one from Denmark, the other from the UK. One person was working in Addis, one in Gondar and each had someone visiting. Later we were joined by a brother and sister from Australia. When dinner started, all the tables were arranged for couples. We didn’t want to stop socializing so we pulled three tables together and completed confused the wait staff. It was a fabulous way to spend Christmas: good food, new friends and a wonderful host. 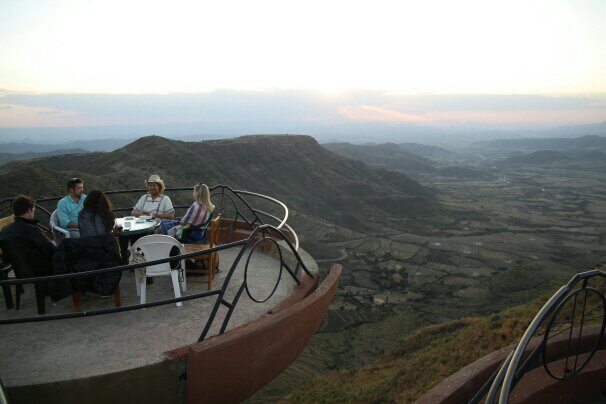