This weekend I volunteered for the Foothills Frenzy, a 50k running race in Boise. It was the first time I volunteered at an ultra. Since the event was going to last 12 hours, I thought I’d get an afternoon shift (definitely not a morning person). It turns out, there really isn’t an afternoon shift, or a noon shift, or a morning shift, there’s just an all day shift… that starts at 4:40am.

I packed my bag the night before and as I biked to Fort Boise, I asked myself several times, why did I think this was a good idea? From there, we car pooled up to the trail head on Rocky Canyon road and started hiking into the aid station we were working. It was still dark out, but the city lights made for some great views. The woman who organized the aid station brought her children along and I hiked with her 12 year old son. On the way up, we stopped to notice the shimmering and twinkling of the city lights and briefly talked about Schlieren lines. Always fun to geek out with kids and see their excitement about science.

We got to the intersection to set up the aid station at the same time as the ATVs that were delivering the tent, table and water. We unloaded and set up in the dark with plenty of time before the first runners. When they did arrive, it was an eerie site to watch the soft glow of headlamps bouncing along the hillside. We were at mile 6.5 and the last of the runners were coming through as light was starting to pour over the horizon. 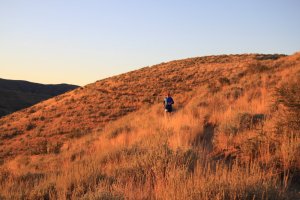 It took a long time between the first light seeping over the horizon and the Sun actually rising. As it did, the first runners came back through our station. The hills were glowing orange and these runners were more concerned with their pace than getting water or snacks, so it gave me a chance snag a few photos before the surge of runners arrived.

Soon, more runners started to arrive and we helped them fill their water bottles, get snacks, gave them a few encouraging words and sent them on their way. Most were doing well (or as well as can be expected 24 miles into a 31 mile race), a few were hurting and one almost dropped out. He came limping into the station. We gave him a sandwich and he slowly limped back out, but within five minutes, he had turned around and was coming back in. I’m fairly certain that if he could have gotten a ride home from there, he would have dropped out of the race. It was evident in his face and his movements that he was no longer enjoying any part of this endeavor. Unfortunately, we were still two miles from the closest road. He sat for a while, stretched and used a foam roller. After 10 minutes, he was back on his feet. Again he limped out of the station, but this time, it was clear that he was making it to the finish. 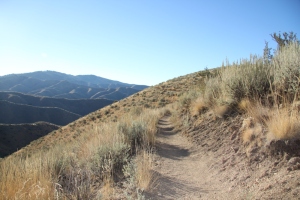 Slowly, the number of runners coming through dwindled and the time between runners lengthened. We had more waiting to do. The two kids started playing tic-tac-toe in the dirt with anyone who would play them and the younger one showed off her gymnastics moves. I asked her if she could do a handstand and she spent several minutes trying to show me one. The rest of us talked about work, hobbies and anything else we could think of, but the recurring topic was, of course, other races people had done. It was pretty inspiring. Most of the people I run with think it’s crazy to run any distance longer than 26.2 miles, so my handful of 30-35 mile runs is way too long. With this group, I might have been the only one to never have run a 100 mile race. I must add it to my list.

Eventually, the sweepers came through to let us know the course was clear and we could pack up. We gathered all we could carry, leaving the tent and table for the ATVs. The organizer and her kids waited for the ATV drivers to return. As we headed up the hill, I looked back to see one more attempt at a handstand.

It was a fun way to spend a day. The runners were so grateful that we were there and, after a plenty of sleep, I decided it was worth getting up early for. Next year we’ll have to find additional ways to make the aid station eccentric, silly or whatever it takes to help distract the runners from a small amount of pain their feeling. That said, I think we did an ok job this year.

Have you ever volunteered for an ultra or any other event? What was your experience like? Any ideas for what we could do next year to make the aid station even better?