After getting the French Country bread recipe working well, I wanted to try something new. Instead of increasing the non-white flours slowly, I just eliminated the white bread flour completely. The dough was wetter than other breads I’ve made recently, but I think the wetness added to the oven spring.

I ran out of time to bake this so I put it in the refrigerator while we went to a movie, then let it sit on the counter over night. In the morning, it had risen by about 50%. It had various size bubbles in the dough and was still wetter than I’m used to working. I formed it into a boule and let it rise again in a metal bowl lined with a well floured cloth napkin. About four hours later, I baked it at 450F for 40 minutes with a cup of ice added for steam at the start.

The crumb is a little tighter than usual, but it’s still airy and I think smaller bubbles are to be expected with a whole wheat bread. Overall, I think it turned out well. This bread may become a regular, especially in colder months. 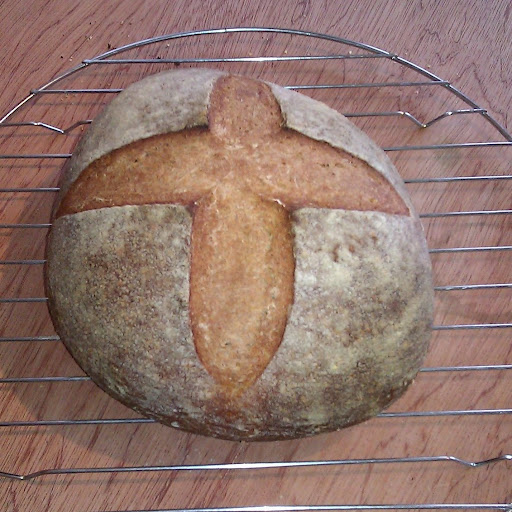